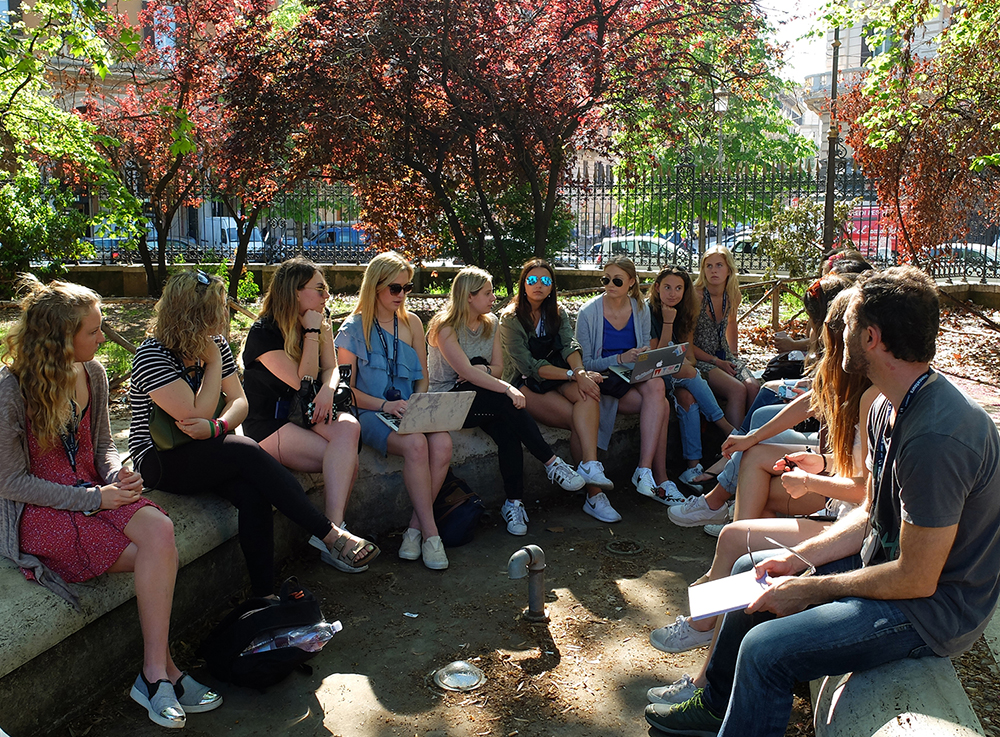 Students in the inaugural Rome semester for the USC Annenberg School for Communication and Journalism recently joined professor Lorenzo Rinelli for an on-site class in the Esquilino neighborhood, or as Rinelli described, “the only truly trans-ethnic place you will find in Rome.”

The course, Media and Migration in Times of European Crisis, studies the role of media in generating and propagating discourse around immigration in Europe, connecting today’s coverage of the refugee crisis with the images and symbols employed to report last century’s European migration. Students consider how images and symbols of immigration become and remain political, are employed in the process of nation-building and construction of the other, and even impact the position of borders.

Steps from Rome’s central train station, Rinelli pointed out the Casa dei Diritti Sociali, an NGO working to reduce social exclusion and poverty among migrant and refugee communities in Italy and the Global South. The NGO also offers Italian lessons to refugees and, outside the building, a mural by artist Mauro Sgarbi titled Divine Hospitality depicts Dante Alighieri standing face-to-face with Gibore, a former student from Senegal.

Just a few hundred meters ahead, students observed the headquarters of Forza Nuova, a far-right, ultranationalist political party. The party’s name is predominantly displayed on the stone building in fascist typeface, just below a Syrian flag waving in support of Bashar al-Assad.

The students contemplated the juxtaposition of the two sites and their clear symbolism – out-stretched arms versus defiant rejection. “You want to see a border?” commented Rinelli, recalling the in-class lectures leading up to the visit, “you are physically in the border right now.”

The group continued through the neighborhood, past the many Chinese-run businesses lining the streets, and into Rome’s main multicultural market. There they considered the role of a market as a gathering place or sanctuary for ethnic minority communities, a place to exchange goods, but also cultures. The same themes are explored in Amara Lakhous’ Clash of Civilizations Over an Elevator in Piazza Vittorio, in which an Iranian character is a trained cook, but rejects Italian cuisine and all it represents, resigning to a job as a dishwasher.

Seated in a circle around an empty fountain in Piazza Vittorio, the students presented prepared notes on themes and characters from the novel, gesturing toward the places where the story took place. “You can read and discuss these things in class,” one student commented, “but it means so much to actually be here.”