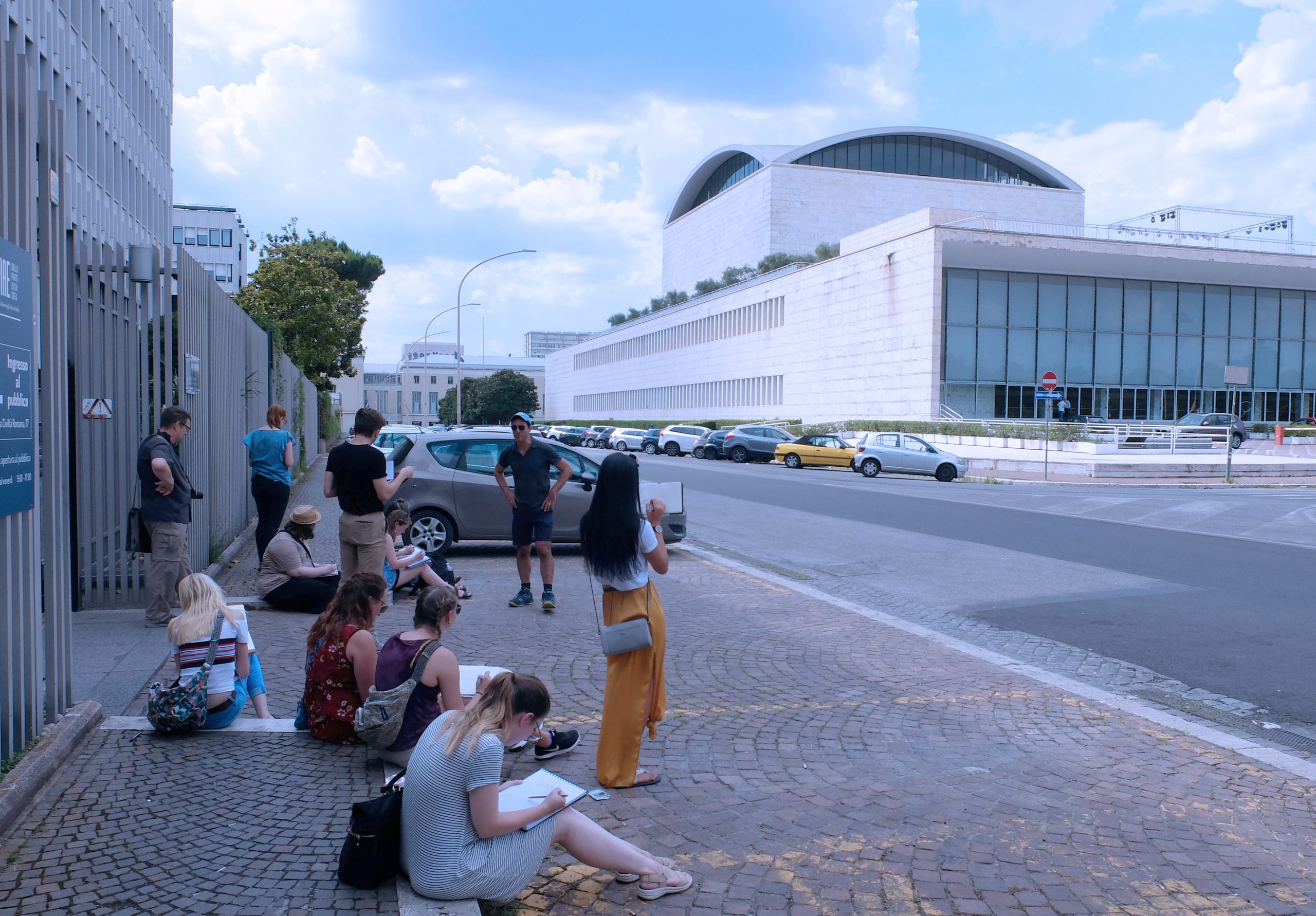 East Tennessee State University has collaborated with Accent Rome on an annual Architectural History summer program since 2009. Two years ago, the faculty-directed program expanded, and now offers Interior Architecture students the opportunity to stay on in Rome for the summer and complete twelve credits toward their degree requirements. After a three-week Architectural History program, this group completes an architecture studio, a Sustainability course with ETSU faculty, and a local design elective.

The local course, Made in Italy: Materials and Processes, asks students to think critically about design and Italian culture, breaking both down into their most basic components and tracing intersections between the two. That is just what the group did under the late afternoon sun in June, as they emerged from the Metro station at EUR Magliana and climbed the steps of the Palazzo della Civiltà Italiana, colloquially known as the Square Colosseum.

The on-site lecture in Rome’s EUR neighborhood aimed to illustrate Mussolini’s use of design and architecture to reinforce his political agenda in the early 20th century. The area was developed to host the 1942 World’s Fair and, in celebration of the Italian Fascism’s twentieth anniversary, was designed as a reinterpretation of Ancient Rome’s classical identity. The World’s Fair was eventually cancelled altogether, but the district still stands today, a marriage of classicism and modernity, a symbol of Mussolini’s fascist utopia.

As students sketched the Palazzo della Civiltà Italiana, professor Andrew Kranis challenged them to draw not only the building’s walls and foundation, but its empty spaces, the symmetrical arches cut into travertine marble and stacked to form the imposing façade. As the group snaked through the streets of EUR, Kranis asked students to consider Mussolini’s intentions and the vision of Italy he aimed to project at the World’s Fair.

Students observed the porticoed walkways, which evoke the streets of Italy’s industrial heart in the north, and noted arches, obelisks, and columns that stand as descendants of the better-known monuments of Ancient Rome that they visited during their first days in the city.

To close the afternoon, Kranis brought students to the foot of Massimiliano Fuksas’ “La Nuvola,” a massive convention center that aims to transform EUR into one of Europe’s corporate capitals.

As they sketched Fuksas’ near completed work and contemplated the future of EUR, one student expressed surprise that she had been in Rome for nearly two months, but had not visited this area. “When you have so many iconic places in one city, how do you value them all?” she wondered aloud. This, Kranis noted, has been Rome’s fundamental problem with modernity.

Short-term, faculty-directed programs are an ideal launchpad from which to explore opportunities for new, semester-length customized programs for your portfolio, building relationships with Accent faculty who collaborate to adapt coursework from campus curriculum to include local resources and experiential learning. Explore more examples of unique program models here.