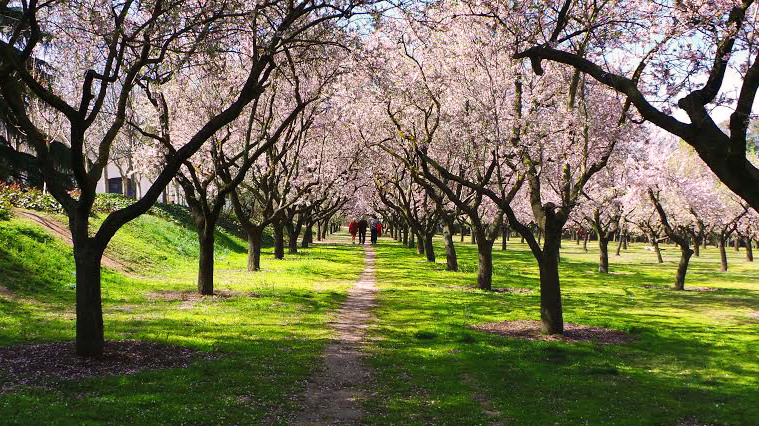 Madrid is an exciting city to be in at any time of year. With over three million residents and an unending array of cultural events, gastronomy, and art exhibits, there truly is something for everyone here. That being said, there is nothing quite like experiencing this city at the beginning of spring when it’s just starting to get warm.

Madrileños can be seen out and about, walking around with an ice cream cone in hand, trying to find a free table at any outdoor terrace, or soaking up the sun at the popular Retiro Park or Temple of Debod. However, one of my personal favorite things to do in Madrid at this time of year is not one that is found in many guidebooks and also happens to be one the city’s best kept secrets: La Quinta de los Molinos.

La Quinta de los Molinos, or Estate of the Windmills, is a charming public park located in the San Blas-Canillejas district, in the eastern part of the city. It spans over 21 acres and is home to a large number of eucalyptus, olive, and pine trees. However, the main attractions are the more than 1,500 almond trees that bloom every year between February and March, showcasing a stunning display of pink and white blossoms.

The park originally belonged to the Count of Torre Arias, but in 1920 it became part of the estate of an architect and professor of urban design named César Cort Boti. Boti was originally from Alicante and wanted to create a Mediterranean style garden, which he did by planting many almond and olive trees. It was also around this time that two windmills were brought over from the U.S. for water irrigation purposes, thus giving the estate its name. It wasn’t until the 1980s that Quinta de los Molinos became a public park.

Surprisingly, this park is still relatively unknown, but it’s a fantastic place to have your very own hanami (花見), or flower viewing, experience.

If you find yourself in Madrid in early spring— or any time of year at that— I would definitely recommend taking the time to discover this hidden gem in the city.

Inspired to find the hidden gems of Madrid for yourself? Use the ACCENT Program Finder to discover your next great adventure: http://accentintl.com/find-a-program/.