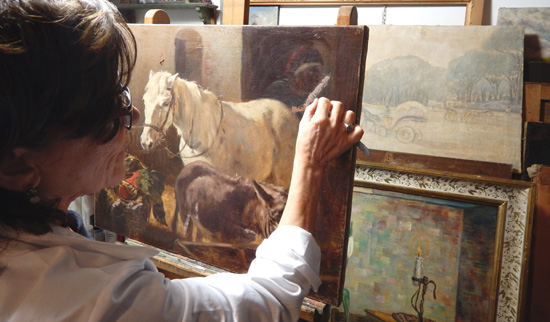 Since 2011, ACCENT and Michigan State University have collaborated on a program in Italy as part of the school’s Freshman Seminars Abroad, an initiative to support first year students’ transition to campus by introducing students to MSU faculty and promoting critical thinking, writing, and study skills through discussion of thought-provoking global issues. In Summer 2015, fifteen students enrolled in Art and Medicine in Italy, a course designed for STEM students to illustrate the many links between science and the humanities.

The group started in Florence, where art and science were one and the same in the eyes of Renaissance masters Michelangelo and Leonardo Da Vinci. They viewed original anatomical models from the Renaissance and spoke with a local expert about the representation of the Plague in Baroque painting. ACCENT Rome arranged a lecture with Gabriele Favero, associate professor of Chemistry at University of Rome La Sapienza where he teaches Chemistry for Restoration and Conservation.

Professor Favero illustrated the importance of scientific analysis in art restoration, and described the many strata of a painting, using famous works that the students would later view in the museums of Rome as examples. He also introduced the classification of pigments and the chemical make-up of solvents used in restoration. Laura Symonds, lead faculty and MSU professor of Neuroscience, remarks, “Professor Favero is obviously an expert in his field, and he went to a lot of trouble to put together material that would be of particular interest to the students. Many of the students commented to me afterward how valuable it had been to hear him — we all learned a tremendous amount!”

Following the lecture, the group visited Valentina Pasquali’s art restoration laboratory just across the street from the ACCENT Study Center. Valentina described her training, which required that she complete five years of observation before laying hands on her first work of art. She showed two samples – a 17th century oil on canvas and a 16th century oil on wood – and reiterated that her work requires mastery of both art and science.