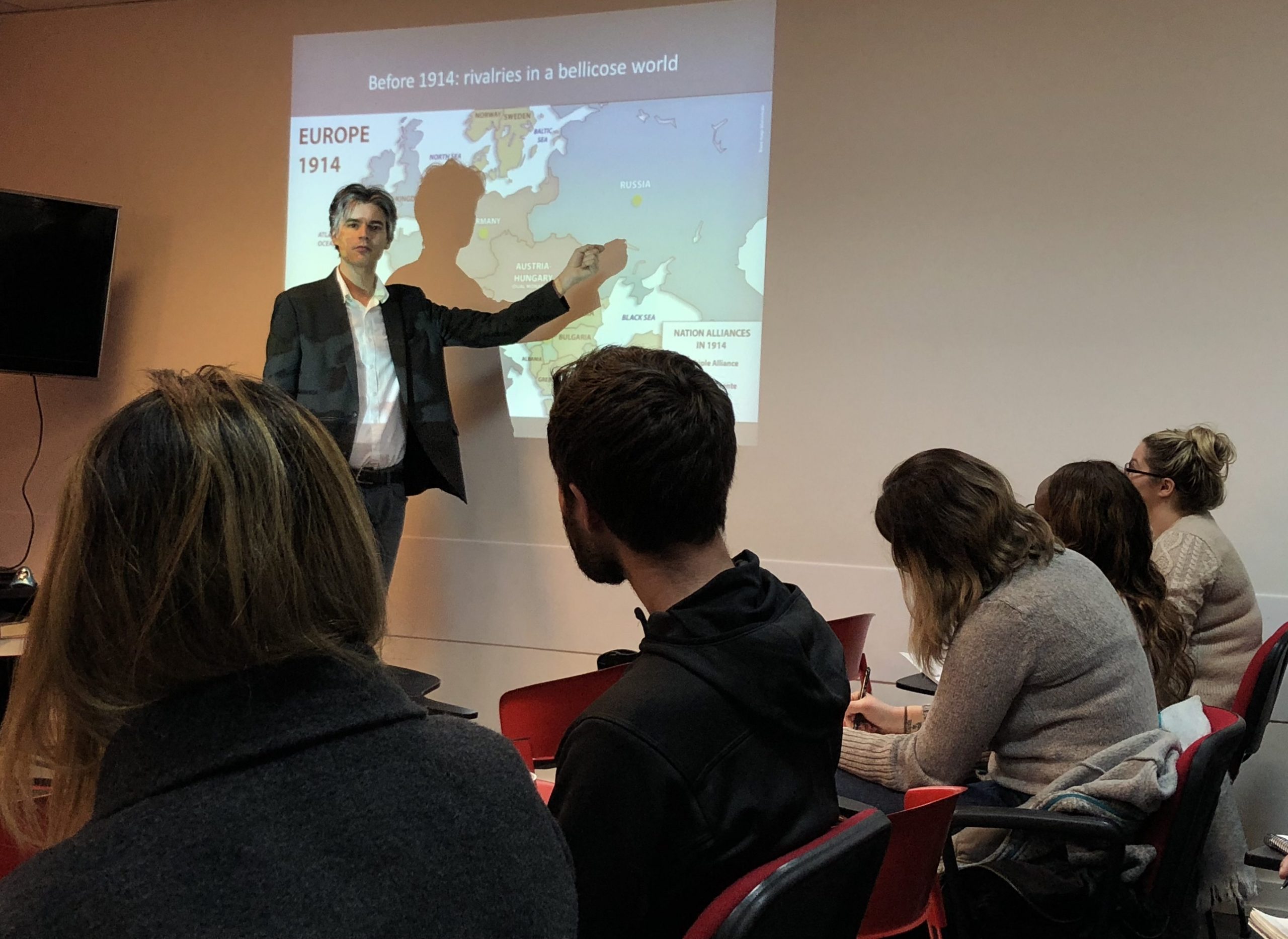 Last November, Accent Paris previewed a series of lectures and events that would commemorate the centenary of the end of World War I. Today, the team reflects on a year of engaging conversations and looks forward to continuing the initiative throughout the fall.

The lectures are open to both semester and short-term programs and have been included as program activities within a number of customized faculty-directed programs. The WWI series underlines the role that the war played in shaping today’s world and encourages students to think critically about the significance of major world events and the importance of studying – and learning from – history.

In Why the Great War Matters, André Loez, professor and author of multiple books on the War, provides an introduction. He stresses the conflict’s importance as a global event, reshaping borders in Europe, Asia and Africa, and outlines its significance in helping historians to understand key mechanisms of warfare such as mass mobilization, propaganda, and genocidal violence. The interactive discussion traces the impact of the War throughout the 20th and into the 21st century, considering its influence on the world order, politics, diplomacy, and economics, but also the legacy of its powerful images seen in painting, writing and film.

Expanding on this idea of legacy, Anne Catherine Abecassis, art historian and professor at the Sorbonne, leads students on a visit to the Water Lilies series at the Musée de l’Orangerie, for which World War I provided inspiration for Claude Monet’s final pieces. On November 12, 1918, the day after the French defeat of Germany, the artist wrote to his dear friend Georges Clemenceau, French Prime Minister and “the father of victory,” to offer a series of decorative panels to the French State to celebrate this moment of peace. After eight years of negotiations, political intrigue, doubts, and discouragement, the resulting series today represents one of the largest monumental achievements of painting from the first half of the twentieth century, and the most renowned masterpiece of the French painter.

And finally, this fall, semester students will partake in a study tour to Eastern France that illustrates the scale and impact of World War I, visiting the battlefield near the city of Verdun where nearly one million soldiers from both sides were killed in the war’s longest battle. Alongside the Verdun Memorial, the area is also home to the Douaumont Ossuary, with remains of 130,000 unidentified French and German soldiers, and the Tranchée des Baïonettes mass grave. During the excursion, students will stay in Nancy, former capital of the Duchy of Lorraine, traveling through Reims on the way back to Paris to visit its Gothic cathedral, venue for French coronation ceremonies for centuries, and also learning about the regions champagne production.

Each Accent Study Center regularly proposes a series of topical lectures, visits, and excursions linked to each local context. Such initiatives are integral to the academic experience of students in custom semester programs. To learn more about customized semester programs with Accent, explore some examples here.